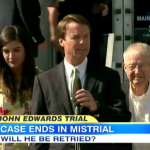 Dan appeared on Good Morning America today to discuss the possibility of an Edwards retrial following yesterday’s verdict. “One of the most interesting things we heard is that John Edwards never got the money,” explains Dan. There was question as to why the government would prosecute if the money never actually went through the campaign fund. One of the jurors even said after looking over everything she did not think the case should have been brought. The jurors were only able to find Edwards not guilty on one count, and were unable to reach a decision on the other five. What is the likelihood that the justice department will pursue a retrial? “I don’t see how they can retry it with one not guilty, and in this kind of case, I don’t see how they do it,” answers Dan. After the announcement, John Edwards made a statement about his past actions. Says Dan, “I think John Edwards finally feels free to in his view come clean, but at least talk about this stuff, this is not something that he’s ever discussed before.” Watch the video here.