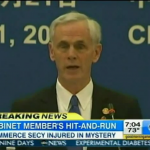 Dan Abrams appeared on Good Morning America today to discuss Commerce Secretary John Bryson‘s multiple car crashes. Bryson was involved in two hit-and-run accidents on Saturday in California’s San Gabriel Valley before being found unconscious by police in his Lexus vehicle. He was then treated by firefighters on the scene, and admitted to the hospital instead of jail despite being cited for felony hit and run. Dan explained to host George Stephanopoulos that, if Bryson had a pre-existing condition such as a tumor or epilepsy, “it’s possible” that he would not be held legally responsible for the series of crashes. However, he also said that if that were the case, “there are first questions about whether he should have had a license,” citing California’s specific requirements regarding who can and cannot have a license, including specific regulations for drivers with epilepsy. Dan also stated that the charges against Bryson could be dropped if authorities find there’s no way he could have known about this. Because it was a first-time incident, unpredictable, and it “wasn’t reckless or negligent on his part,” this is a possibility. The incident would then be described as a “medical episode,” at least when it comes to any criminal charges. Dan says the more likely outcome is that his medical condition becomes the defense in the trial. Watch the full video here.