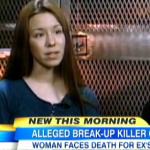 Dan appeared on Good Morning America today alongside fellow legal analyst Nancy Grace to discuss the trial of an alleged break-up killer in Arizona. Jodi Arias, 32, is accused of stabbing her ex-boyfriend Travis Alexander 27 times, slitting his throat, and then shooting him to death. He was found dead in his shower in June 2008. Since being accused, she has told three different stories: she wasn’t there, she was there but watched two other people attack him, and she was there and killed him in self-defense. Of her changing tunes, Dan says, “I think that, in the end, this self-defense claim is an effort to get second-degree murder… I think they know that they are in big trouble here. She’s now, by arguing self-defense, effectively admitting that she did this… I think this is an effort by her to say, ‘You’re not going to be able to prove pre-meditation. This happened in the heat of passion.'” For more, including whether the prosecution will go for the death penalty (and of course, how Nancy and Dan disagree), watch the full video here.