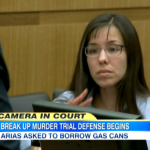 Dan appeared on Good Morning America today to continue his coverage of the murder trial of Jodi Arias, alleged break-up killer, accused of stabbing her ex-boyfriend Travis Alexander 27 times, slitting his throat, and then shooting him to death. Yesterday was the defense’s first day of witnesses in the trial, and Dan says, “If you view this case the way I do, which is there’s almost no chance she’s going to get acquitted, the question is can she possibly get a second-degree murder charge, pre-meditation becomes absolutely crucial.” He continues by discussing one specific piece of evidence: gas cans. It was revealed that she borrowed to gas cans from a former boyfriend on the eve of the killing, and receipts from Arias’ trip from her California home to Alexander’s home in Mesa show that she purchased a 10 gallons of gas at one gas station the night before she drove to Arizona, and then another 10 gallons from a different gas station 10 minutes later. It’s possible she brought the gas with her to fill up her car secretly on the way to Alexander’s home to avoid being seen, which is premeditation for the murder. Dan explains, “The gas cans are incredible powerful evidence to support the prosecution’s theory that this didn’t just happen… she thought about it and she planned it.” Watch the whole segment here.