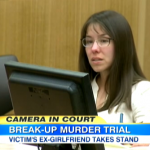 Dan was on Good Morning America today, again covering the murder trial of Jodi Arias, alleged break-up killer, accused of stabbing her ex-boyfriend Travis Alexander 27 times, slitting his throat, and then shooting him to death. In the latest, an ex-girlfriend of the victim took the stand, as the defense continues to have witnesses testify. Dan discusses the happenings, explaining that she wasn’t particularly helpful to the trial: “We’re now seeing witness after witness being called by the defense here to prove what? I mean, so he had an ex-girlfriend who was once mad at him – so what? Another witness testified that she and her relative once witnessed a fight that Jodi Arias got in with Alexander – oh, my goodness! Horrors, they once got into a fight! …If that’s the standard for suggesting someone needs to engage in self-defense, we’re all in a lot of trouble here.” Watch the full video here.