16 Jan Dan on Jodi Arias: Was it Self-Defense? 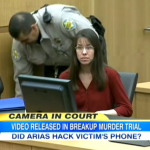 After a quick trip to the West Coast, Dan returned to Good Morning America today to continue his legal analysis of the ongoing Jodi Arias murder trial. Arias, 32, is accused of stabbing her ex-boyfriend Travis Alexander 27 times, slitting his throat, and then shooting him to death. He was found dead in his shower in June 2008. Since being accused, she has told three different stories: she wasn’t there, she was there but watched two other people attack him, and she was there and killed him in self-defense. Today, alongside fellow legal analyst Nancy Grace, they ask the question: was it self-defense? “There is enormous amount of evidence here, not just that she lied, but that she lied again. The question in this case – and I think probably all the lawyers recognize this – is not ‘Is she going to be convicted?’, it’s ‘What is she going to be convicted of?'” says Dan, continuing “That’s why the interrogation tapes get really tricky for her, because on the one hand, she kind of has to take the stand if she wants to be serious about this self-defense claim since there’s almost no other evidence of self-defense, and yet, you see on these interrogation tapes her so convincingly lying about nuance after nuance – if she gets up there and lies to the jury, she increases her chances of getting the death penalty.” For more, watch the full segment here.