09 May Dan on Jodi Arias Verdict 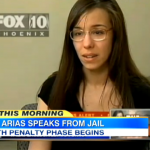 Yesterday, the highly-anticipated verdict was announced in the Jodi Arias trial, which went on for months. An Arizona jury  found her guilty of first-degree murder in the slaying of ex-boyfriend Travis Alexander. Now, the next phase of the trial will begin to determine whether she faces life in prison or the death penalty. After her conviction, Arias publicly stated that she would prefer death. This morning, Dan dropped by Good Morning America to discuss the case with HLN host Nancy Grace, who believes her statement is “reverse psychology.” Dan agrees with Nancy, saying “I think that she’s trying to manipulate the jury; my guess is that she does want the jury to come back with a life sentence, and she’s hoping that by saying she’d prefer death, the jurors will then punish her, so to speak, by giving her life in prison.” Dan continues, “There’s no other way to interpret it than she’s trying to talk to the jurors; she lies so often that it’s hard to trust anything that comes out of her mouth.” Watch the full segment here.