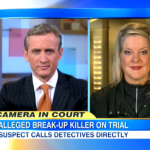 Dan appeared on Good Morning America alongside HLN host Nancy Grace to continue their legal analysis of the Jodi Arias trial. Arias, a 32-year-old woman from Arizona, is accused of brutally murdering her boyfriend, Travis Alexander, in June of 2008. She stabbed him 27 times, shot him, and brutally slit his throat, leaving his body in the shower and evidence in the form of photos on a camera found at the crime scene. She has changed her story three times, but is now arguing that she was forced to kill him. Dan and Nancy weigh in on the ongoing trial, including new evidence such as a phone call from Jodi to the detective on the trial, which she now admits included lies, as well as the 911 call from the friends who found his body and immediately suspected Arias: says Dan, “Here’s the problem: you’ve got her on audio tape first saying that she wasn’t there at all, talking to the detective, trying to be helpful supposedly; then, shortly thereafter, you have her on video tape, lying with a different story, this time saying ‘Well, okay, I was there but there were intruders.’ So it’s not just notes of a detective saying ‘Here’s what she said the first time’ – you have her on audio tape telling one story, you have her on video tape telling a different story, and now you have her lawyer in court arguing something completely different.” For more, watch their segment here.