16 May Dan on Jodi Arias & the Death Penalty 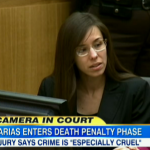 After a few days off, Dan was back on Good Morning America today, continuing coverage of the ongoing case of Jodi Arias. Charged with first-degree murder of her ex-boyfriend, Travis Alexander, her trial now continues to determine she will face life in prison or the death penalty. So what will happen? Dan explains, “To sit on a death penalty case, you have to be able to say, ‘I could impose the death penalty on a case like this.’ My point in this has not been that the prosecutors won’t be able to prove the aggravating factors, and not that the jury may not come back and say that the aggravating factors may outweigh the mitigating ones – I, from day one, have believed that the prosecutor, Juan Martinez, never should have pursued this as a death penalty case, because I don’t believe that this is so unique, so the worst of the worst, such a special case that the death penalty should apply. This is a horrific domestic murder case, and they happen a lot, and I think that we have to use the death penalty more sparingly.” For more, watch the segment here.