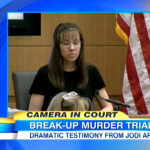 Dan appeared on Good Morning America today alongside fellow legal analyst, HLN’s Nancy Grace, to continue covering the murder trial of Jodi Arias. Arias, 32, is accused of stabbing her ex-boyfriend Travis Alexander 27 times, slitting his throat, and then shooting him to death. Yesterday, she took the stand. Dan weighs in, “I’ve said from the beginning this is a terrible defense, they’ve made almost no progress thus far, but Jodi Arias is a greatwitness. She’s a great liar, but she’s a great witness.” He continues, “She looks over at the jury at the right times, she pauses at the right times, she thinks at the right times.” So what will happen? Dan answers, “I don’t know that that’s going to hold up on cross-examination, I would doubt it very highly, but they had to put her on the stand for this defense.” For more, including what Nancy thinks of her strategy, watch the segment here.