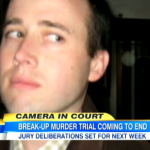 Dan appeared on Good Morning America today alongside Nancy Grace to discuss the ongoing murder trial of Jodi Arias, accused of killing her ex-boyfriend, Travis Alexander. As the trial comes to an end, Dan and Nancy discuss how the verdict will hinge on premeditation. Dan says: “The bottom line is that this debate over whether Jodi Arias has or doesn’t have borderline personality disorder is not going to be what this case hinges on. Basically, what the judge is saying is, ‘Yes, the prosecution mentioned a new theory in its rebuttal case… Yes, I’m going to allow the defense to call a quick witness to respond to that – it’s not significant.’ The key here is that the focus of the rebuttal case by the prosecution has been on the most important issue in this case – and that’s premeditation. The prosecution trying to hit home here that Jodi Arias had planned this – that she’d bought gas cans so she wouldn’t have to stop, that the gun story that she told about the closet doesn’t work – this is the most important issue in this case.” For more, watch the segment here.