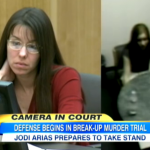 Dan was on Good Morning America today  discussing the murder trial of alleged Arizona break-up killer Jodi Arias, 32. Arias is accused of stabbing her ex-boyfriend Travis Alexander 27 times, slitting his throat, and then shooting him to death. He was found dead in his shower in June 2008. Since being accused, she has told three different stories, complicating the case: first she wasn’t there, then she was there but watched two other people attack him, and finally, she was there and killed him in self-defense. In the latest, there has been a reported plea deal attempt. We have learned that a few years ago she approached the state and attempted to plead guilty to a second-degree murder charge which carried a penalty of up to 25 years, however it was rejected. Dan weighs in: “A second-degree murder conviction or a plea would have been a big win for Jodi Arias, and I’m not surprised prosecutors said no.” For more, watch the video here.