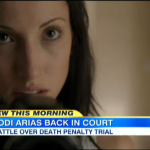 Today, Dan appeared on Good Morning America to discuss what is expected to happen in today’s hearing for the Jodi Arias case.  Aria was convicted of killing her boyfriend through a stabbing while in the shower.  Dan is asked what is going on with the hearing today.  Dan says, “They’re going to decide when to start the case.  The defense is saying, ‘Give us extra time until January.  We’ve got other cases we’re arguing.  We need more time to prepare our defense.’  The prosecutor is saying, ‘You’ve had plenty of time.  Let’s get this thing started.’  I’m still hoping is going to happen, is they’re going to get back into chambers and figure out a way to end this thing.  The notion of having another full-blown trial, just to determine does Jodi Arias get the death penalty, or life in prison, seems to be – But when it comes to something like the death penalty, it would require the prosecutor, Juan Martinez, going and talking to the family members here, convincing them they want to end this.”  Watch the segment here.