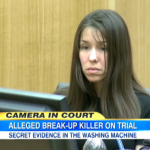 Dan appeared on Good Morning America this morning to again discuss the case of Jodi Arias, the 32-year-old woman accused of stabbing her ex-boyfriend, Travis Alexander, 27 times, slitting his throat and shooting him in the head as he showered in his Mesa, Ariz., home in June 2008. Though at first she denied being present in the home they day of the murder, she later changed her tune and said she was there but saw two other people attack him. Now, she’s saying she did murder him but was “forced to kill.” The defense is saying that he abused her and attacked her when she dropped his new camera. So what case do they have, especially with her changing stories? Dan answers, “They have an enormous amount of evidence linking her to the crime scene, so they almost had no choice but to change the defense.” As for the brutal murder? “It’s a domestic violence case; that’s what you see in cases where people know each other very well.” For more, watch the segment here.