21 May Dan on Jodi Arias: Death Penalty Not a Sure Thing 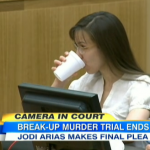 Dan was at Good Morning America today, again talking Jodi Arias, the break-up murder trial that has captivated the nation. After being charged with first-degree murder of her ex-boyfriend Travis Alexander, the jury is in a second phase to decide whether she’ll receive life or death. But for the second time in two weeks, her attorneys requested to be removed from the case citing a mistrial – a motion the judge denied. Dan explains, “It’s not surprising that the judge said no, but put yourself in the attorney’s position for a moment, which is you’ve got prospective witnesses saying ‘I’m not going to testify in this case’ because of death threats and other issues; it’s not frivolous… they’re in a tough spot. Jodi Arias really has become a sort of national pariah… so that’s sort of the position that they find themselves in now as attorneys trying to represent her.” For more, watch the video here.