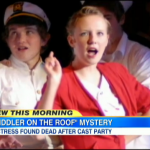 Dan appeared on Good Morning America this morning to discuss Jessie Blodgett’s strange death at her parents home in Hartford, Wisconsin.  The young actress was found dead in her bed in the morning following a cast party.  Dan says, “There’s a definitive time line here.  The fact that they know that she came back to the house, her mother sees her return at 1:00 a.m, the mother then goes into the bedroom — we don’t know if she sees her, whether she’s alive or not at 8:00 a.m., doesn’t check — then finds later at about noon that she’s dead. You know she’s in the house.  So, if something happened in the house, you would have expected, of course, maybe there would have been noise, something heard by the family, not always the case when something like this happens.  But having that time line will be important. And I think that’s going to focus the investigators on someone that she knew.”  Watch the segment here.