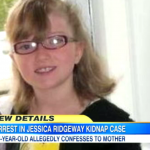 Dan appeared on Good Morning America today to continue his coverage of the Jessica Ridgeway case. Ridgeway, a 10-year-old girl from Colorado, was abducted and murdered earlier this month on her way to school. Her murder has also been linked to an attempted abduction of a 22-year-old woman jogging in a park earlier this year, in May. In the latest in the murder case, a suspect has been arrested and will appear in court: 17-year-old Austin Reed Sigg, reportedly turned into police by his mother. Of the arrest, Dan explains that Sigg will be charged as an adult, which is legal in Colorado, but “the Supreme Court has ruled that no one under the age of 18 can be charged with the dealth penalty, can face the possibility of the death penalty, so that’s the only protection he has as a juvenile.” Since Sigg has both waived his rights and confessed, age is “the sort of thing his team will undoubtedly bring up when trying to get his confession excluded if they do, but it’s not likely going to be a winning argue… they would probably argue his age in conjunction with other things,” Dan explains. For more, Watch the video here.