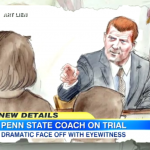 Dan appeared on Good Morning America today to discuss the latest witness to take the stand in the child sex abuse trial of former Penn State assistant football coach Jerry Sandusky, Mike McQueary. “What a devastating day, it seemed, for the defense yesterday,” said host George Stephanopoulos, “what do they do after that?” Dan answered that it’s tough to figure out where they go from here – there are more witnesses taking the stand, and while they have tried to attack witnesses’ credibility, “it doesn’t seem to be that effective because you have so many different witnesses coming forward,” says Dan. Mike McQueary, who testified yesterday, is “absolutely crucial, he is the lynchpin when it comes to the downfall of the Penn State officials.” The emotional jurors were in tears listening to the stories of his accusers – a blow to the defense because that indicates that the jurors believed the testimonies – and there seems to be more and more evidence that Sandusky himself may take the stand, which would show “how desperate this defense team is, because in any other case they wouldn’t.” Watch the full video here.