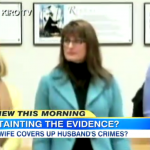 Today, Dan appeared on Good Morning America along with fellow legal analyst Nancy Grace to discuss the case of a Seattle attorney and rape suspect, Dan Grant. Where the case gets complicated, though, is his wife’s involvement: fellow attorney Jennifer Grant. She has allegedly tampered with the evidence as she’s moved his car which the police were planning to search. However, she has not been arrested yet. Explains Dan, “If the authorities ultimately believe that she moved the car — and this is the key point — with the intent to conceal evidence, with the intent to obstruct justice, then they might charge her. As of now, they haven’t done that… there still has been ongoing negotiations between her lawyers and the authorities.” What further complicates the case is that she works for the authorities: she is the Supervising Assistant City Prosecutor. For more, including what will happen to him, watch the video here.