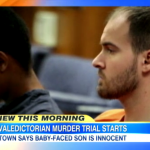 Dan appeared on Good Morning America today to continue his coverage of the case of Jeffrey Pyne, the Michigan valedictorian accused of killing his mother. Alongside fellow legal analyst Nancy Grace, Dan examines the case they prosecutors will make in this matricide trial. Nancy believes that there’s not enough evidence to convict them, and Dan says, “Any time a prosecutor in America hears Nancy Grace say that their case is weak, they’re in big trouble… and I agree with her.” However, while Nancy worries about jury nullification, Dan says “They don’t ned to nullify, though, because the bottom line is that they don’t have more evidence than the prosecution has already laid out. And part of the prosecution’s case is going to be that the motive was the mother’s mental illness, the mother had beaten him in the past — I think those two things together, even with no evidence, the defense is going to be able to stand up and say… ‘They haven’t proved their case beyond a reasonable doubt.'”   Watch the segment here.