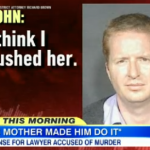 Dan appeared on Good Morning America Thursday, February 20th to discuss the murder of Danielle Thomas by her boyfriend, 35-year-old New York lawyer Jason Bohn. Bohn has admitted to brutally beating and strangling his 27-year-old girlfriend, Danielle Thomas but his lawyers are claiming he suffers from a post-traumatic mental illness because his mom, a successful publishing executive abandoned him for her career. Experts are testifying he was traumatized when his mom, abandoned her children when she began devoting herself to her career, when Bohn was 10 years old. Says Dan, “This is one of these defenses where you shake your head and you say this makes the legal system look terrible. This is a desperate defense right? This is a defense where you have him on audio, okay audio of him committing the crime, they’ve got confessions and you’re not even having insanity defense here… it’s him asking in essence, for a lesser conviction, because he didn’t have the requisite intent, meaning he … couldn’t develop the intent required, there is no way this defense is going to succeed.” Watch the full clip here.