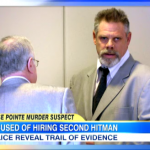 Today, Dan appeared alongside fellow legal analyst Nancy Grace and host Robin Roberts on Good Morning America to discuss the murder of Jane Bashara. Jane Bashara, 56, was a marketing executive and mother of two found dead in her car on the morning of January 25th in Detroit. Now, her husband, Bob, is being arrested for trying to hire someone to silence the man he allegedly paid to kill his wife. Investigators are saying they have video and audio of her husband, Bob, attempting a hit on his former handyman, Joe Gentz, who confessed to killing Jane. Robert Bashara, is expected to be charged today with solicitation to murder a witness, which carries a term of up to life in prison. Dan and Nancy try to make sense of this murder mystery case full of surprising twists. “The hit man hires a hit man to kill the hit man,” describes Nancy. The problem, adds Dan, is that you can’t just “hire a hit man like you hire a plumber” and the person that Bob Bashara trusted to hire then went to the police. “Watch the defense on this one,” predicts Dan — “if we see this case eventually go to trial, I guarantee you’re going to hear the ‘he never would have been so dumb as to’ defense, which is one that we hear again and again.”  Nancy has a few more things to say though about the actions of Bob Bashara, citing his wife’s brutal murder, his new girlfriend, and his recent placement on suicide watch. As usual, Dan and Nancy get into a rousing argument. Watch the full video here.