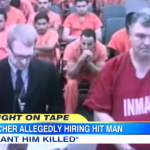 Dan appeared on Good Morning America today to discuss the case of James Pepe, a teacher who allegedly hiring a hitman to kill a former co-worker. Pepe, 55, is a social studies teacher at Bloomingdale High School in Hillsborough County. He was arrested at school on Thursday, accused of trying to put out a hit on Robert Meredith, a former co-worker at Strawberry Crest High School. The evidence against Pepe is strong: On Saturday, prosecutors played in court a phone conversation allegedly between Pepe and a friend (who later tipped off police). Asks the friend, “What do you want done with Bob Meredith?” To which a man (allegedly Pepe) responds, “I want him killed.” The motivation? Police said Pepe wanted Meredith killed because he believed the teacher was spreading rumors that he was a child molester. So how does Pepe defend against these tapes? Answers Dan: “We often see in the defenses: ‘I never actually planned to do it, I was never actually going to go forward with this, it was just idle talk’… I think what they’re going to say is that he was entrapped,” or that the friend talked him into it. Dan believes that if they can get the tape cleared from evidence, the authorities will have very little to go on. Hear more of Dan’s opinion, including how other allegations against Pepe will effect the case, here.