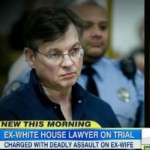 Dan provided an insightful interview for a piece on the trial of J. Michael Farren, the ex-White House lawyer who is accused of brutally beating his then-wife, in 2010. Farren, charged with deadly assault, opted to represent himself in the civil trial back in December of 2013, which resulted in a guilty verdict. Farren didn’t even show up for court claiming, via e-mail, he was in the hospital. The civil jury awarded Farren’s ex-wife nearly $29 million dollars. Now jury selection is underway for his criminal trial, which could cost Farren his freedom – if convicted, he could face up to 70 years in prison. Farren’s defense? He is trying to prove a mental defect and although he initially said he would be defending himself, he ultimately opted to have an attorney. Says Dan, “In the civil case he didn’t even show up so a huge verdict was issued against him. But now he’s going to have to be there and now his freedom is at stake… It’s always a bad idea to represent yourself in a criminal case and it’s probably even a worse idea to represent yourself if you’re pursuing a mental defect defense.” Watch the full piece here.