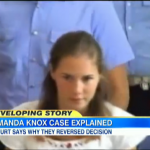 Yesterday, Dan appeared on Good Morning America to discuss why the Italian Supreme Court overturned the appeals court’s decision on the Amanda Knox case and what this “sex game theory” is all about.  In 2011, an Italian appeals court ruled that there was not enough evidence to prosecute Knox.  Now, the Supreme Court is reversing the decision based on a theory that had been thrown out.  Dan says, “This supreme court got into the weeds here. They got into the facts. Basically saying, they do not agree with the appellate court’s conclusions based on the facts in this case.  But those are fact-based issues, which likely should be addressed at the lower level, not at the high court.”  When asked to comment about the new focus on the “sex game theory,” Dan says, “I was surprised.  If this was a bunch of guys sitting around, saying what about this? What about that? Fair enough.  This isn’t a bunch of guys. This is the Supreme Court of Italy.  As a result, I think that was the danger in the opinion we saw.”  Watch the segment here.