12 Nov Dan on Interview With Gypsy Willis After MacNeill Conviction 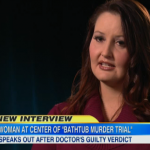 Dan appeared on Good Morning America today to discuss his interview with Gypsy Willis, that occurred only days after Martin MacNeill was convicted of first degree murder this past Friday. Prosecutors built their case around the belief that MacNeill murdered wife, Michele, so he could be with his mistress, Gypsy Willis.  Explains Dan, “It was a circumstantial case based on love, betrayal and lies. But a jury convicted [MacNeill] after just one long evening of deliberation, and it may have come down to just once basic fact; that those jurors simply believed  Martin MacNeill loved another woman, so much, that he needed his wife out of the picture completely.”  While this may be the case, Gypsy expresses in her interview that she still does not believe MacNeill is guilty. Watch the full clip here .