02 May Dan on Homeowner Homicide 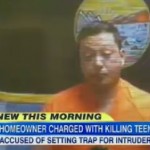 Dan discussed the case of Montana man, Markus Kaarma, who is charged with killing teen, Diren Dede. Kaarma was at home one night with his partner and their child when they say they were alerted to an intruder in the garage. Kaarma claims they were already on edge because of two recent break-ins and upon heading “threatening noises” fired 4 shots from his shotgun into the dark garage killing 17 year old, Diren Dede. Kaarma is charged with deliberate homicide because prosecutors believe that the couple set a trap. In court documents police say the couple left their garage door wide open, set up a camera and deliberately left behind a purse. Kaarma plans to plead not guilty but if convicted could possibly face life in prison. What did Dan have to say? “It is legal to have sensors outside your home, it’s legal to have cameras, it’s legal to leave your garage open and have expensive stuff in your garage. It is not legal to bait someone into your home to then try to kill them. Remember, the defense here is self defense… it has to be reasonable and necessary meaning necessary even to prevent the felony from occurring, he doesn’t have to have felt physically in danger, he has to have felt at least it was necessary to stop the felony from occurring to shoot him and that’s where it’s going to be tough for the defense.” Watch the full clip here.