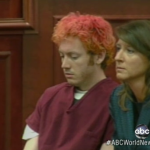 Dan appeared on ABC’s World News yesterday to discuss whether Colorado shooting suspect, 24-year old James Holmes, can stand trial. Holmes appeared in court for the first time earlier in the day, and questions regarding whether he was competent to stand trial and whether he would plead insanity were raised. Holmes arrived sporting bright orange and red hair and seemed “out of it.” What was going on? Dan explains that this is likely how he was arrested and they did not make a change, perhaps because his lawyers did not really know Holmes yet or because his most likely defense is mental defect. As Holmes seemed to doze off in court, Dan observes that “you really have a number of options here: he’s either extremely tired, he’s got some serious mental defect, or he’s faking it – and that’s really ultimately what a court and a jury will have to determine.” The first big determination, though, will be competency to stand trial. “Before we even talk about what kind of defense he’s going to pursue, the first question is does he understand the proceedings,” Dan states. Watch the full segment here.