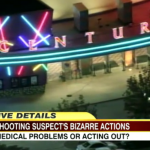 Continuing his coverage of last week’s tragic movie theater shooting in Aurora, Colorado, Dan appeared on Good Morning America today to discuss suspect James Holmes’ first court appearance yesterday. Alongside Dr. Marisa Randazzo, Dan analyzes Holme’s strange demeanor in court and what it could mean for his ability to stand trial and his potential defense. Dan puts down the rumors that he was given sedative medication in prison, explaining that he would only have been given medication he was already taking and they wouldn’t have given him anything that put him in the “quasi-catatonic state” in which he appeared. He continues, “One of the key things for them here as a legal matter is assessing his mental state, so one of the last things they want to do is alter his mental state.” They go on to debate whether he was faking it, with Dr. Randazzo taking the stance that it’s a small chance and Dan arguing that since his moves were so calculated (i.e., the apartment being booby-trapped) he must have considered what would happen when he was arrested. Dan also explains the unusual situation of the defense team getting access to the crime scene before the owners have regained access to their property. He’s not sure how it will help them, but it is worth noting. Holmes is due back in court next week. Watch the video here.