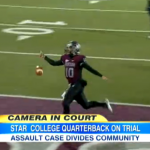 Today, despite the impending blizzard, Dan appeared on Good Morning America, to discuss a rape case beginning today: that of Jordan Johnson, star college athlete & former quarterback for the University of Montana Grizzlies, accused of sexually assaulting a woman he met at a party. Reports Dan, “It’s a case that’s divided a community, part of a far larger debate and investigation into whether a major university and a local police department and prosecutors have done enough to respond to dozens of claims of sexual assault.” So what will happen? Dan explains, “If the jury this morning decides to convict, Johnson faces up to a hundred years behind bars,” though he continues, “It can also be as little as two to four years, and in a case like this, where it’s a real ‘he said she said,’ the medical testimony becomes absolutely crucial.” Watch the full segment here.