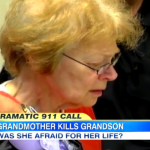 Did Sandra Layne shoot her grandson? Dan appeared on Good Morning America today to discuss her murder trial. “It’s going to be a tricky defense, no question about it — if she were to pursue a self-defense claim, it would be difficult because, in particular, becausthe shots weren’t fired, it seems, one right after the other, it seems that there was some delay, which should give her the opportunity to leave, retreat, call someone etc. — and I think that’s the biggest problem with regard to any self-defense claim,” explains Dan. However, it is possible that her grandson was still holding on to her as she was making the call, leaving the possibility of self-defense open. What role will community support play in her defense? Layne’s friends are already coming to her defense. “A jury, prosecutors… anyone who’s making a determination here is saying to themselves ‘Why would she have done this? How could she have done this?’ And there’s no question that’s going to help her in some way, shape, or form,” answers Dan, continuing though that “does that mean she’s not going to be convicted? No, but it means that it’s going to be part of her defense.” The trial is ongoing, and what happens remains to be seen. Watch the full segment here.