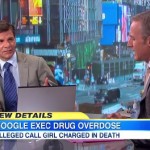 Dan joined the Good Morning America team on Thursday, July 17th to discuss the executive from Google who was found dead on his yacht from an overdose of heroin that was allegedly given to him by an expensive escort, who is now charged with murder. Alix Tichelman, 26, is shown on surveillance footage, from a camera on board the yacht, helping  Google executive, Forrest Hayes, father of five, inject himself with heroine before he collapses and dies. The footage then shows Tichelman stepping over Hayes’ body and finishing her glass of wine, showing no concern or care. Tichelman is claiming it was an accident but police are telling a different story.  Tichelman, facing charges that include manslaughter, possession and prostitution, has pleaded not guilty and is now being held on $1. 5 million bail. Says Dan, “She’s charged with voluntary manslaughter. Typically, voluntary manslaughter is heat of passion or a fight. To prove voluntary manslaughter, in this case, they’re going to have to still demonstrate that she had the intent to create serious injury. The defense says, look, we were doing drugs together, I didn’t have any intent to do anything wrong here. So I think that this is a play by prosecutors to try to get her to plead to involuntary manslaughter.”  Watch the full clip here.