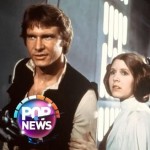 Dan joined the Good Morning America team on Monday, May 26th to report on the latest in the Pop News Heat Index. First up, everyone at GMA wishes actress, Emma Watson congratulations for her graduation from Brown University. The Harry Potter actress, graduated with an English Literature degree from Brown in 5 years, giving herself a little extra time so she could star in some very successful films. The next “buzzy” topic, actress Carrie Fisher will reprise her role as the iconic Princess Leia in the new Star Wars movie. Fisher talks about some of the things she wants to change this time around… will they bring back the braided buns? A new study done by researchers at Pennsylvania State University found that many people are more stressed at home than at work. Surprisingly ( or not so surprisingly) women reported feeling more stress at home than at the workplace. And finally, it wouldn’t be the Pop News Heat Index without an animal video. Watch the cute video and the full clip here.