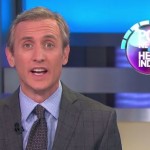 Dan filled in at the Pop News Desk for Good Morning America’s Lara Spencer on Friday, June 6th to discuss the latest in the world of pop culture. The first story shows an interesting use of social media. A sales executive named Bev McNeill found a “Woody” doll from “Toy Story” on the side of a freeway, posted a picture of it on Twitter with the hashtag “get woody home” and it quickly became a trending topic. Woody’s apparent owner has now come forward to reclaim the doll in true “Toy Story” fashion, he said it has been 9-10 years since he had the doll but identified the writing on the bottom of Woody’s boot and distinguishable bite marks, he says are from his younger sister. The next story is a pretty funny “Wheel of Fortune” fail, definitely a clip worth seeing. And finally, Pop News would not be complete without a video of some dancing kittens and you can watch that video plus the full clip  here.