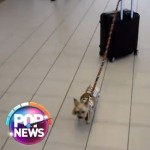 Dan joined the Good Morning America team again on Tuesday, April 29th to fill in at the pop news desk. Dan kicks off the day’s pop news with the speculation of casting for the new “Star Wars” movie. Apparently many of the original actors have been showing up in London near the studio where the movie is to begin shooting. While the full cast hasn’t been announced yet, original cast members like Harrison Ford, Carrie Walker and Mark Hamill were all rumored to be in London. The next story in popular entertainment is about actor, George Clooney. Clooney is getting married again and now apparently owes actress, Michelle Pfeiffer some big bucks. Hollywood’s most famous bachelor bet the actress $100,00o dollars that he would never marry again but is this the kind of bet you’re supposed to pay off? Next at the pop news desk, an adorable video of a 3 pound Yorkie dog, dressed in a coat, pulling a 30 pound suitcase through the airport. Watch the full clip and see the equally cute and hilarious video here.