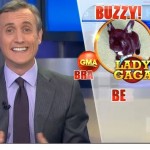 With Robin Roberts out for the week, Dan is filling in at the “Pop News Desk” for Good Morning America. Dan joined the Good Morning America team Monday, April 28th, in addition to his usual legal segment, to report the latest on pop news. What’s going on in the world of popular entertainment? The cast of the new “Avengers” movie all went out to dinner together while filming in London. The casual meal included some big stars including, Chris Hemsworth, Samuel L. Jackson, Robert Downey Jr., Scarlett Johansson, and Mark Ruffalo to name a few. Lady Gaga is the proud new mother to a “batpig” puppy aka Asia, a baby French Bulldog. Finally, Dan tests out his British accent when reporting about a YouTube video that has gone viral of a cute little boy who thinks he has a magic wand. Viewed nearly 250,000 times, an adorable toddler points his wand at the TV screen to make it pause and start again and his amazement at his “power” is a must see. Watch the full clip here.