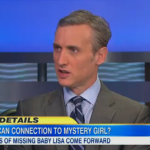 Dan appeared on Good Morning America today, analyzing three different legal cases making headlines today. He talked about “Maria,” the “gypsy girl” found in Greece with adults claiming to be her parents but look nothing like her. Now, families of missing children around the world are holding out hope – watch that segment here. He also discussed the murder of NFL player Sean Taylor, where a man standing trial accused of murder says police forced him to confess. Watch that segment here. Finally, he reported on the Missouri teen who claimed she was sexually assaulted by a football star, but the charges were dropped. Now, a special prosecutor has been appointed to reopen that rape case. Watch that segment here, and tune into GMA on ABC to see Dan most mornings.