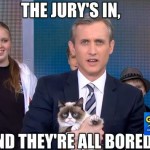 Dan joined Good Morning America’s Amy Robach for an episode of GMA LIVE! on Wednesday, April 29th. Amy and Dan are joined by a special guest, none other than Grumpy Cat. The angry looking cat has skyrocketed to social media fame just by the grumpy expression on her face and Dan and Amy had a chance to pose with the little cat to make some funny memes of their own. After Grumpy Cat departs, Amy and Dan join the winners of Food Network’s “The Great Food Truck Race”, to learn how to make some interesting recipes with… spam. The two brothers from Hawaii are making gourmet recipes from the canned meat, including spam sushi. Finally, a man joined Tinder as a cupcake and has been getting more attention from women than when he joined as himself. Watch the full episode here.