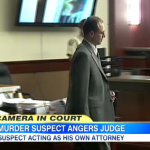 Dan appeared on Good Morning America today to discuss a case in Georgia which is garnering national attention. A man, Waseem Daker, was convincted in 1994 of stalking a woman, Loretta Spencer-Blatz, and is now back on trial: this time for murder. The twist?  He is acting as his own attorney, and in the process, examining his own stalking victim. Moreover, the judge does not seem too thrilled about his choice to represent himself. “It’s always a really bad move to represent yourself,” says Dan, continuing, “there’s a famous line that says anyone who represents themselves has a fool for a client, and there are reasons for that.” Why? The witnesses can attack the lawyer, the judge can get frustrated, and they can create general chaos in the courtroom, among other issues. For more of Dan’s explanation of the case, watch the video here.