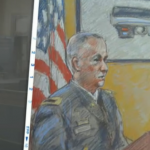 Dan appeared on Good Morning America today to discuss the case of the Fort Hood shooter, Major Nidal Hasan. Lawyers assisting  Hasan in court martial asked to be removed from active participation, after he chose to represent himself and seek the death sentence. Dan explains, “They say if he’s not going to try to avoid the death penalty, we can’t ethically continue being part of this defense – meaning he hasn’t been cross-examining witnesses, he’s admitting that he was the shooter here… and they’re saying, look he seems to be trying to get the death penalty – if that’s the case, we don’t want to be involved in this. In all likelihood, the judge is going to instruct them to continue advising… he’s representing himself, so they’re just giving him basic advice on the law.” For more about the trial (which has already cost the U.S. government $5 million), watch the full segment here.