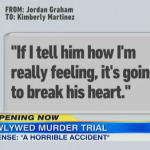 Dan appeared on Good Morning America on the morning of December 10th to discuss the first witnesses to testify in court for the trial of the woman accused of murdering her husband only 8 days after they wed, Jordan Linn Graham. The trial began on Monday December 9th and one of the first people to testify was Graham’s maid of honor. The judge is hoping to have the trial concluded by this Friday.  Dan gives his opinion on the first day of the trial, “It’s a pretty straight forward case, I’m not surprised it’s going pretty quickly, but what’s really interesting is how both sides are trying to use the problems in the marriage. The prosecution is saying, this is the motive: she wanted out so she killed her husband. The defense, on the other hand, is saying she was worried, she did want to talk to him about getting out, she texted friends about her concerns, ‘ look I’m going to have the talk today but if you don’t hear from me maybe something happened.'” Watch the full clip  here.