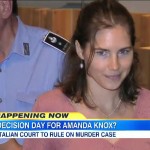 Dan appeared on Good Morning America, Wednesday March 25th, to discuss the latest in the ongoing Amanda Knox case. Italy’s highest court is reviewing the final appeal of Amanda Knox’s murder conviction of the brutal 2007 murder of Meredith Kercher, Knox’s roommate while she studied abroad in Italy. This high-profile legal saga of Knox and her then boyfriend, Raffaele Sollecito ( also convicted),that has flip-flopped from guilty to innocent to guilty verdicts, will finally reach a final conclusion. Dan commented, “It’s been a winding and emotional ride for Knox, her 2009 conviction for the alleged murder of college roommate Meredith Kercher was overturned on appeal in 2011 then that acquit wall as thrown out in 2013 and she and ex-boyfriend Raffaele Sollecito were convicted again last year by an appeals court… If this conviction is upheld there are no more appeals on the murder charge in Italy.” Watch the full story here.