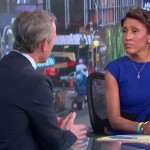 Dan was on Good Morning America, Tuesday, July 22nd to discuss the latest on Justin Ross Harris, the father from Georgia who is accused of leaving his 22-month-old son in a hot car all day, which resulted in the child’s death. Harris is charged with murder but new questions are being raised about this case and an investigation by The Atlanta Journal Constitution finds that the security camera video does not show what authorities say it shows. A reporter with The Atlanta Journal Constitution also found other discrepancies and says that some of the evidence in the case was misrepresented. Says Dan, “This is a good story, I think it’s an important story, but remember, he’s not charged with intentionally trying to kill his child and I think that’s really important. No question the detective in this proceeding, in this hearing, strongly suggested that he — they believe this was premeditated but the actual charge that he’s facing here, right now at this point, does not involve intentional conduct. It just involves recklessly or being grossly negligent in leaving his child in the car and the child, therefore, dying, so in that sense, it may not affect the case as much as the article seems to suggest.” Watch the full clip here.