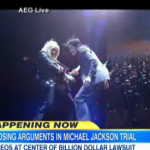 After five months, the wrongful death trial of Michael Jackson’s family versus AEG Live is finally coming to an end. Dan stopped by Good Morning America to discuss how the jury will soon decide if AEG is responsible for the death of pop star Michael Jackson, after hearing from more than 50 witnesses and spending 84 days in court. The trial has become very emotional for the late pop star’s family, who have been present in court and some of whom have testified. Dan explains their significance in the case, “They are the plaintiffs in this case… they’re all being called for slightly different legal reasons, but the truth is, as a legal matter, each of their testimony isn’t that significant. The important legal questions here are who hired Dr Conrad Murry, who controlled Dr Conrad Murray, was what happened here foreseeable? Those are all questions that the family really can’t answer, in terms of what they directly know.” For more, watch the full segment here.