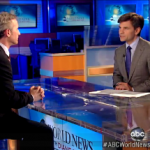 Dan appeared on ABC’s World News last night to discuss the latest developments in the child sex abuse trial of former Penn State assistant football coach Jerry Sandusky. The jury on Wednesday became extremely emotional while listening to the testimony of accuser Mike McQueary, and while Dan says this sometimes happens with gruesome autopsy photos, in this case, because it happened while listening to McQueary’s accounts of what Sandusky did, Dan thinks it means the jury believed him, which is not good news for the defense. Why let it go to trial then? “They probably didn’t have much of a choice,” explains Dan, continuing that they could either plead guilty to all charges or go to trial. Further, despite Sandusky’s bad media interviews, they might have to let Sandusky take the stand in a last resort “hail mary” — to relate it to football — move. Either way, Dan concludes that “this is a tough, tough defense. Watch the full episode here.