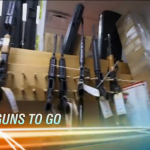 The United States is the most heavily armed nation in the world, and every day guns fall into the wrong hands.  On Nightline Tuesday night, Dan discusses an undercover investigation to see how easily guns are sold in the United States.  With the help of Jesse Torrez, a private investigator in Arizona, Mariana Van Zeller experiences how easy it is to find weapons and acquire them.  Dan says, “For Americans, owning weapons isn’t a privilege, it’s a constitutional right, and one that many exercise proudly.  But most law abiding gun owners may not think a whole lot about AK-47’s or powerful sniper riffles unless they are in the military, collectors, or, in the worst case scenario, criminals.  So just how easy is it to get a hold of some serious weaponry?”  Watch the full episode here.