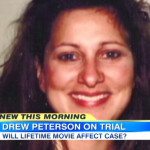 Dan appeared on Good Morning America today to discuss the case of Drew Peterson, a long and complicated one. A former Illinois police sargeant, Peterson has been married four times, and is suspected of killing his third and fourth wives. His third, Kathleen Savio, died in 2004. A jury will begin deliberations today to decide whether he murdered her and made it seem like an accident (the death was originally ruled an accident, but after police posthumously examined her body, it was changed to a homicide an Peterson was charged.) In 2007, Peterson’s case became especially notable when his fourth wife, Stacy, disappeared. So what does Dan think of all this? Alongside host George Stephanopoulos, he says that this case may not be as easy as it seems. “Basically what they have are these allegedly incriminating statements that drew Peterson has made as recounted by family, friends, etc of both Kathleen Savio and of Stacy Peterson. There’s been a three-year legal battle over whether these statements were going to come in, these statements so important to the case that the prosecutors I think recognize they wouldn’t have had almost anything to go to trial with without these statements,” explains Dan. There is little evidence otherwise, says Dan, since her death was originally deemed an accident and therefore not treated as a crime scene. Further, Stacy, the fourth wife who has been missing for years, is “not even supposed to be a part of this case,” as this trial revolves around the murder of Kathleen Savio. Watch the video here.