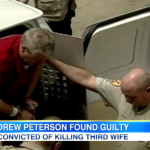 Dan appeared on Good Morning America today to discuss Drew Peterson’s guilty verdict and the disappearance of his last wife. A former Illinois police sargeant, Peterson has been married four times, and was suspected of killing his third and fourth wives. His third, Kathleen Savio, died in 2004, and yesterday he was charged with her murder. Was Dan surprised with the verdict? “Not really,” answers Dan, continuing “A lot of people talk about this case and they say ‘well, you know it’s really based all on hearsay evidence,’ and that’s true – a lot of it is hearsay evidence, but one of the reasons we generally don’t allow hearsay evidence in is because it’s so powerful.” Peterson’s sentence is still to be determined. Watch Dan’s appearance, including his thoughts on Peterson’s fourth wife and the jury’s work, here.