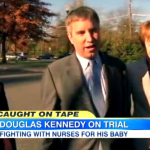 Dan appeared on Good Morning America today to discuss the the trial of Robert F. Kennedy’s son, Douglas, for an altercation at a maternity ward. He is charged with harassment (kicking a nurse) and child endangerment as he attempted to take his baby out of the maternity ward “for fresh air” in January of this year. Which is the stronger case? Dan answers, “Harassment by far… harassment isn’t what you typically think of as harassment in terms of the English language, harassment legally means striking, kicking, and the defense is essentially conceding that that happened… and so child endangerment is the more serious charge and the much more difficult charge, but as a technical matter, it’s gonna be hard to get around the harassment charge.” Dan goes on to explain how if this wasn’t a high-profile case, Kennedy probably wouldn’t have faced criminal charges. This does not mean that Kennedy was not in the wrong, but rather that the DA faces enormous pressure when trying this case to make it criminal versus civil. For more of what Dan has to say, including whether Kennedy will take the stand and what sentence he might face if convicted, watch the GMA segment here.