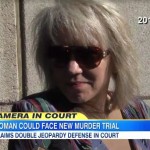 Dan was on Good Morning America, Wednesday, June 25th to discuss the latest on Debra Milke, a former death-row inmate who spent decades behind bars and is now in the mists of fighting another legal battle. Milke was convicted of murder in 1989 for the death of her 4-year old son, Christopher, when prosecutors convinced a jury that Milke hired two men to take the boy into the desert and shoot him. However, last year, a federal appeals court overturned her conviction and ordered a new trial, ruling that prosecutors withheld evidence of alleged misconduct by a now-retired detective. Milke, who has always maintained her innocence, has made bail with the help of supporters and is free for the time being. Her attorneys are trying to convince a panel of judges that retiring her for murder would be double jeopardy.  Says Dan, “The defense actually has a very weak argument on double jeopardy…It’s not double jeopardy to overturn a case and retry the defendant. The person’s getting a new trial. What the defense seems to be saying here is that the violations by the detective were so egregious that there shouldn’t be another trial.”  Watch the full clip here.